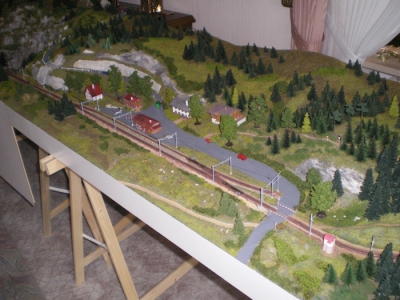 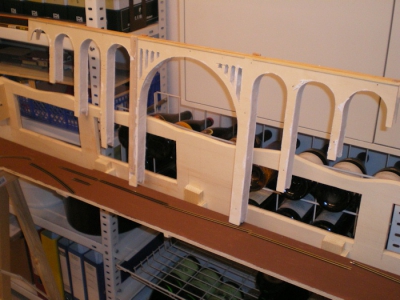 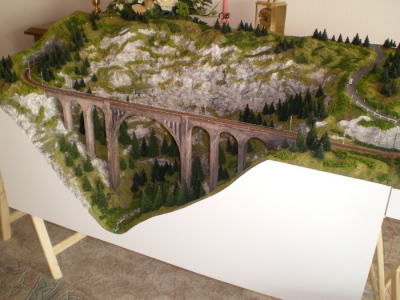 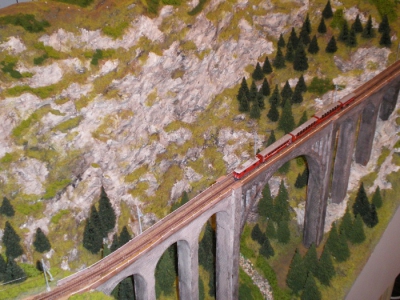 The railway line Davos-Filisur connects the wintersport town of Davos with the famous Albula railway line in Graubünden, Switzerland. It has offered, since its construction in 1909, a direct rail connection from Davosw via Filisur to St. Moritz.

The route Davos – Filisur is extremely spectacular and consists of 14 tunnels, 28 viaducts over a 19km length. The most famous building achievement is the ‘Wiesener Viaduct’ which is situated behind the station bearing the same name, ‘Wiesen’.

From a railway perspective the Wiesen railway station is extremely quiet. It has a diversion track, a main track and a delivery track. The complex consists of a normal RhB railway building with storage space, a waiting room, a residential house and a restaurant.

After leaving the station of ‘Wiesen’ the train crosses a viaduct, which is one of the region’s biggest and magnificent stone bridges with a length of 210m and a height of 88m.

This small section of railway routes challenged me. It is not possible to purchase the respective components in this size so I had no choice but to build it myself. In particular, the wooden buildings were a challenge! I took the necessary photographs during a visit to the railway station. There is a construction set available in Z-gauge for the cable and signals. However, even the building of these items was extremely difficult. Only trees, lights and people were commercially available. The track system was built under my direction by the German/American company ‘Aspen-Model’ in Düsseldorf. 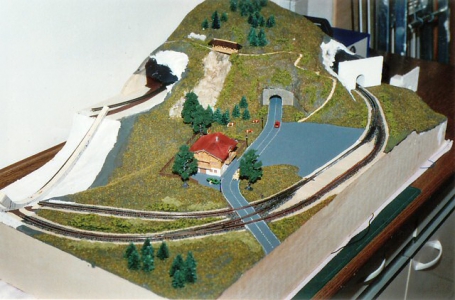 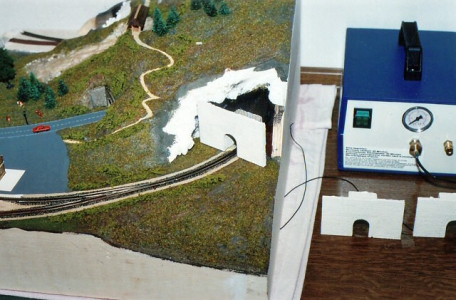 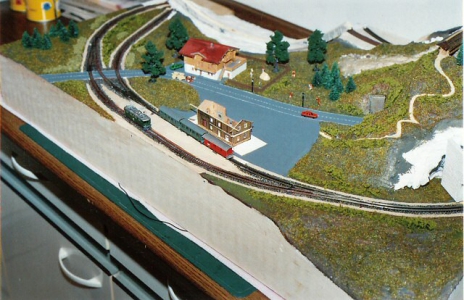 At the end of the year 2002 the collection of commercially produced Zm-articles has become such an enormous extent, that it ought to be represented nationwide. A good occasion therefore was the 4 th meeting of model railways on May 3 and 4, 2003 at Göppingen. Just this exhibition, which is organized by Märklin every 2 years can be seen as the Mekka of the gage Zm-fans. Where else a presentation of the gage Zm railway should have more success than there? Therefore I offered Mr. Freudenreich to create a glass case installation for his booth , in which all Zm parts which are available at the beginning of 2003 can be represented in an appropriate way. Because of my experiences concerning the production of my own Zm-installation I forced an open door at Mr. Freudenreich with this proposal. The stipulation for a glass case of 60 x 90 cm did not allow enough room for a pretentious routing. Quickly we agreed on a track plan and an authentic topography. During a visit in Sanitz we discussed all details.
At the end of March 2003 the installation had been finished in routing, creating of ground and wiring and could be picked up. The installation consists of a frame made of plywood and is adapted to the ground. Because of the track without any rises a base-plate with the necessary cutouts for ground deepenings was cemented on track level. The creating of the ground was effected by traditional means. At the end the frame was equipped by white coated plywood, so that it looks professionally in the exhibition glass case. Up to April 2003 the installation of Mr. Freudenreich was completed by RhB-catenary and light signals. The installation is fed by a Miniclub-Device “Electronic 05”. The 16 Volt which are necessary for the switch motors are produced by an autotransformer. This transformer is also feeding a Gaugemaster HF-track cleaner, which has proved to be a great success in this case. 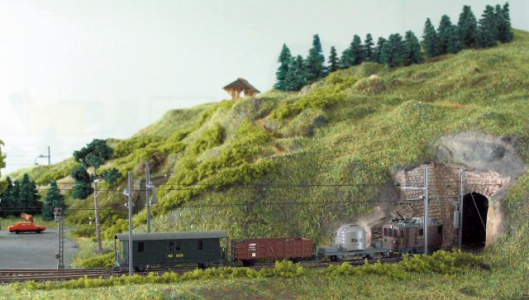 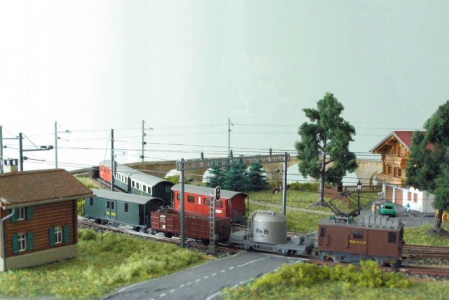 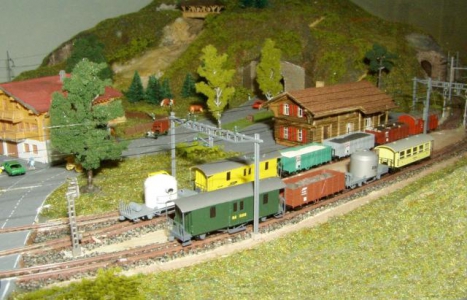 When transferring the installation the function of the routing was demonstrated by my Ge4/4 I. It was running perfectly. For the operation of the engine at the model railway meeting at Göppingen Mr. Freudenreich, however, had different plans, but this is a story for itself: After having created already a small collection of cars according to models of RhB, the company Freudenreich precision engineering planed the development of an appropriate engine. The first Zm engine which was produced in series at Sanitz was the Ge 4/6. This attractive model contains some technical problems for perfect realization, which had to be solved during the short time to be at disposal. In shortest time a sample of the De2/2 151 Bernina freight motor car had been built at Freudenreich’s precision engineering model making factory. To a great extend they could fall back on previous experiences made in connection with Z-normal track engines. In spite of its small execution the De 2/2 151 got an exactly designed drive, that the driving qualities of this little engine amazed many people.

With a total length of approximately 3 cm this tractive unit should also show the limit of the present realizable technical execution. It was not thought at a possible production in series of this tractive unit which was only a sample. But the convincing presentation of the De 2/2 151 of the installation which I had produced at Göppingen in May 2003 destroyed all plans of Freudenreich company regarding the development of Zm-tractive units. There were so many orders of the De2/2 151 which they had not expected, so that this tractive unit was revised for producing in series even before the Ge4/6. 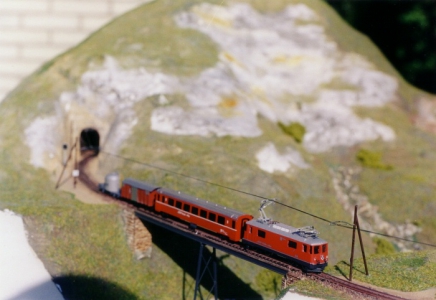 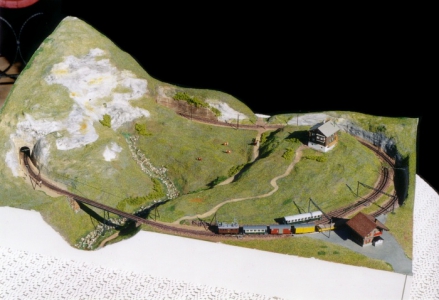 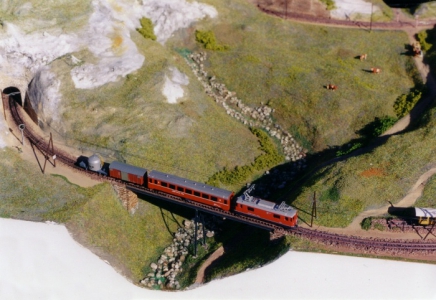 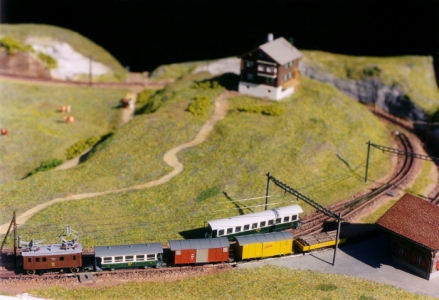 In 2002/2003 Freudenreich Feinwerktechnik developed the Bernina freight railcar class DE 2/2 15i in narrow gauge Zm. To be able to present this tiny railcar, an exhibition installation had to be built. It should represent the tree-less high mountains character of the Bernina massive in Switzerland. Additionally the bridge of this line over a mountain’s creek should be added. This was done by my own ideas. Basis were the results of my holydays in Switzerland in the beautiful area. I watched and photographed everything.

Result is the here presented fully-functional Zm arrangement Bernina with a size of 85×55 cm.
This arrangement has been shown in Utrecht (Holland), Dortmund (Germany) und in the United States.